Web1on1's API that lets you build automations extending the agent console. You can build Web1on1 automations in any language, and run them on any platform: all you need is for your automation to talk to Web1on1 over open Web protocols (HTTPS, REST, OAuth, JWT).

Using the Web1on1 messaging API, your automation can:

Note: when referring to an 'agent' we mean an API user or agent console user that has the 'agent', 'bot' or 'admin' role - from the perspective of the consumer, these users all act as the 'agent'. The term 'contact' and 'consumer' are used interchangably.

Web1on1 makes a distinction between two types of conversations:

The conversation.status property is maintained by the system, and can represent one of four states - queued active closed or archived

Messages in a conversation can be exchanged within a certain conversation.context - a sequence of messages grouped by a common goal, within a specific session.

The context, while active, is copied into each message as the message.context property. This allows you to group relevant messages by context, goal or session using the API.

The conversation.context property is a string consisting of a 'goal' and a 'session' part separated by a dot. The goal represents something that should be accomplished, and the session is a random identifier that can span multiple goals.

Example of a context switch after the second message):

As a conversation state variable, there can only be at most one context set at any given time.

By default, the conversation.context and message.context properties are set by the system, using the following heuristics:

Bots can use the /set @context command to set, change or clear the context themselves, if needed. 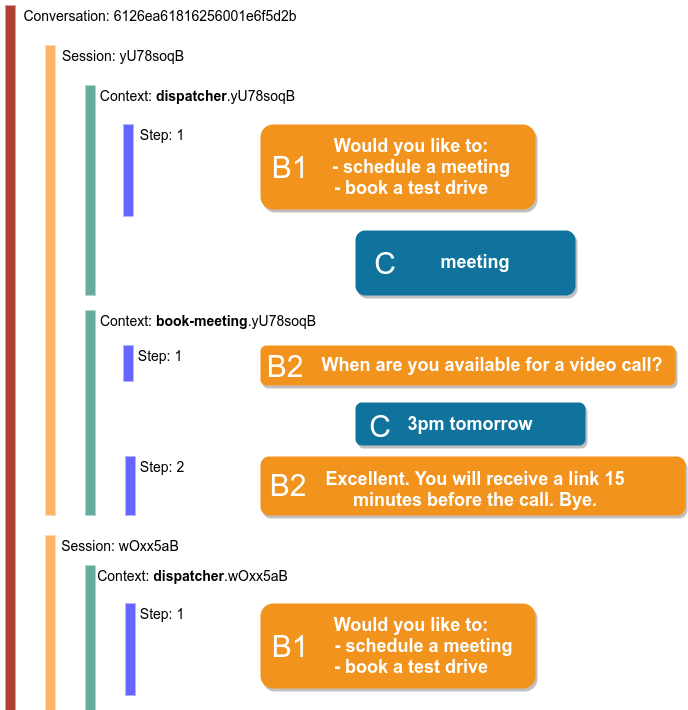 In the example above, we can see two bots talking to a contact, in the following context sequence:

These bots could use the /set @context command to override the default context goals set by the system.

Assigning and joining/leaving is done by sending messages into the conversation - see chapter 5 for details.

All API requests are made on behalf of the user owning the API key (usually a 'bot' user) and the organization the user is a member of - the default user and organization properties used when creating conversations and messages.

To create a new conversation, just POST to the conversations endpoint. For convenience, you may supply an array of message objects to convert into message resources. It is recommended to include an /assign or /notify command, to to target one or more user inboxes or notify channels to act on the conversation.

This will create a conversation, run routing rules and notify any resulting channels.

Instead of notifying channels, you may want to target a specific set of users. For example, to have a conversation pop up in some users' inboxes):

You (the owning agent of the API key) are added to the conversation as a participant. When one of the recipients replies, your inbox flag will become truthy, and when logged into the console you'll receive an inbox notification.

Any changes to active conversations are propagated through the UI to the currently active agent, if any. Typically conversation updates are used for:

Updates to the conversation state can be done through Command messages. For example, to assign a 'queued' conversation to a specific agent:

In addition to commands, messages typed form and field are used to change the state of the conversation. See the chapters on Commands and Forms and Fields for more examples.

Links to Conversations and Messages

Each conversation and each message has a unique url property, (accessible in the API and through webhook payloads), built up by adding the conversation.slug or message.slug as a URL path segment to a base domain (default: app.web1on1.chat).

So conversation- and message links are formatted like this:

By default, these links point towards the Web1on1 agent console, and will resolve to their canonical URLs:

Linking to a custom domain

To have the API generate URLs using a custom base domain, simply update the organization:

This would generate conversation and message URLs similar to